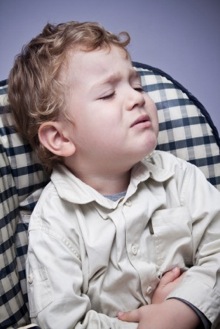 A Stanford University researcher found that gastric irritation early in life could pave the way for lifelong psychological problems. Of course, not all childhood stomach aches will lead to adult depression and anxiety; genetic makeup and when the stomach aches occur developmentally are also important factors.

Researcher Pankaj Pasricha, MD, notes that 15 to 20 percent of people experience chronic pain in the upper abdomen, and are more likely to suffer from anxiety or depression than their peers.

Gut and brain hardwired together

Dr. Pasricha points to the connection between the gut and brain as an explanation for psychological issues related to childhood stomach aches. The gut has its own nervous system—similar to that of the brain—and is hardwired to the brain by the vagus nerve, a nerve that runs from the brain to the internal organs. As a result of signals transferred back and forth, disturbances in the gut can impact the brain.

To test whether chronic childhood gut problems could lead to adult anxiety and depression, researchers performed experiments on baby rats, irritating their stomachs for six days.

Researchers found that these rats showed significantly more anxiety and depression than their peers. They also had higher levels of stress hormones. It was concluded that the early gastric irritation permanently altered their brain function. However, when the researchers inhibited the release of stress hormones in the affected rats, they behaved more normally.

A number of studies show that chronic inflammation rewires the brain to become more sensitive to stress. This causes one to become “stressed out” very easily and suffer from disorders such as anxiety and depression.

So what can you do? First (if you have children), think preventively. Take colic and chronic stomach aches seriously. Intolerance to certain foods, such as gluten or dairy, is often the culprit. Other possibilities include bacterial infections, yeast overgrowth, or parasites.

Bearing all this in mind, the most important first step is to remove the inflammatory triggers that perpetuate the stress. An anti-inflammatory diet is a great way to start. However you may need additional support—such as a gut-cleanse and repair—to unwind inflammation affecting both the brain and the gut.

My office can recommend specific nutritional therapies to help unwind stress, restore gut health, and improve brain chemistry. If your child complains of stomach distress, it’s important that you address the problem right away, in order to reduce the risk of depression or anxiety later in life.